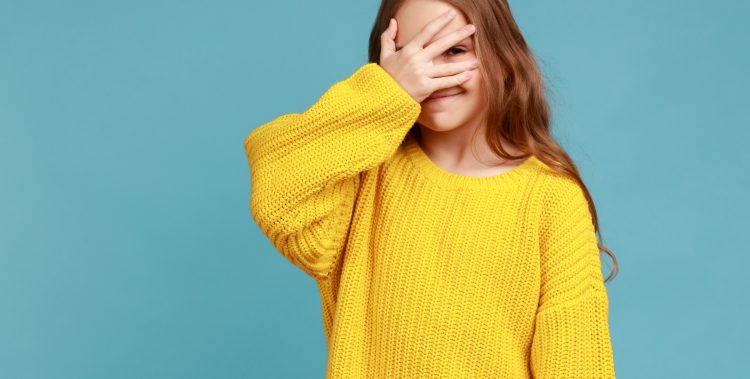 What to do when your child lies

My five-year-old son told me that the door to day 24 of his advent calendar “just came open” on December 2.

The week before, “no one” knocked one of my heirloom ornaments off of the Christmas tree and my eight-year-old daughter has “no idea” how the plate with chocolate crumbs got under her bed.

In fact, telling white lies is actually a good thing – a sign of proper childhood development.

Although it can be a nuisance (and sometimes surprising how quickly and well they can cover their tracks), lying is a natural part of growing up and pushing the limits to see how far they can take it is totally normal.

That doesn’t necessarily mean that you should completely ignore the behavior. In fact, every time your child tells a fib there is an opportunity for a teachable moment.

Kids lie for many reasons. These can include:

The first step to knowing how to deal with a lie is to know the motivation behind the behavior.

Trying to gain approval or sympathy is an attention-seeking behavior. In this circumstance, it is best to ignore or down-play the lie.

If your child tells you that they scored 10 goals in floor hockey in gym at school and the whole class cheered their name, it won’t help anyone for you to point out that you know that isn’t true.

Instead, try complimenting them on their sportsmanship and redirecting to talk about another time they did something well.

Alternatively, you can take a gentle but more transparent approach by telling your child “That sounds like a bit of an embellishment. Do you want to tell me what really happened?” Rather than reprimanding the child, this lets them know they are not “pulling the wool over your eyes” and gives them a chance to try again.

It might be time to take it to the next level and implement a discipline or consequence when the lie becomes more serious. Serious lies could result in harm to the child or have natural fall out from sources outside the home (such as a friend’s parent or a teacher). Lies like this can include an older child lying about where they were or saying that they finished their chores or homework when they haven’t. This type of lie usually happens when the child is trying to avoid consequences.

You can give one “free pass” and let them know at the time that if they lie again, they will lose privileges. If you do need to implement the consequence, it should be related to the “crime.”

Lying about which friends they were with results in all electronics (and forms of communicating with those friends) being taken away for a certain amount of time.

Lying about finishing a chore (to “get out” of doing something) could result in additional chores/responsibilities. Saying they did their homework when they didn’t (to get something they want) could mean doing additional work related to the subject matter of that homework or writing an apology note to their teacher for not finishing.

How to avoid lying

Every child will lie from time to time but there are some things that you can do to make it less likely that they will lie about the important stuff.

When your child has told a lie, give them a chance to come clean. You can even say, “I am going to leave the room for 10 minutes and when I come back, maybe you will be ready to tell me what really happened.”

You could choose to give them a “get out of jail free card” here. “If you are willing to tell me the truth when I come back, there won’t be any punishment” or “you will only lose your phone for a day, not a week.”

Use examples of other people lying as lessons. Luckily there are many books and movies in which lying results in terrible consequences for the characters. Take the time to expand on this and even ask your child what they think a reasonable discipline would be for the character.

Let them know that you love them no matter what. Before you ask a child a question that you may not like the answer to, let them know that no matter how they answer, you will love them and that their behavior is what they do, not who they are. Tell them it is okay to make mistakes and even point out times when you make mistakes and how you make it right afterward. Emphasize that you can work together to find a solution but the only way you can do that is if you have all the information first.

It is important that you do not unintentionally set your child up to lie. If you know the answer to a question, do not ask it just to see what your child will say. Take that time to delve into the issue. “I know you were not with the friends you said you were with last night. Who were you with?”

Do not ever call your child a liar. The problems this causes are often bigger than the reason behind the lying in the first place. This can cause resentment between you and your child and make them to think that no matter what they say, you will not believe them. “If she thinks I am a liar anyway, I might as well lie.” Instead say something like “You are usually very honest with me, but I just can’t understand where the last cookie went.”

The number one thing you can do to help your child avoid lying is emphasizing the importance of honesty as one of your family’s values from a young age.

Praising your children when you know they have told the truth in a situation where it was difficult for them to do so is a great way to get an honest answer the next time as well.