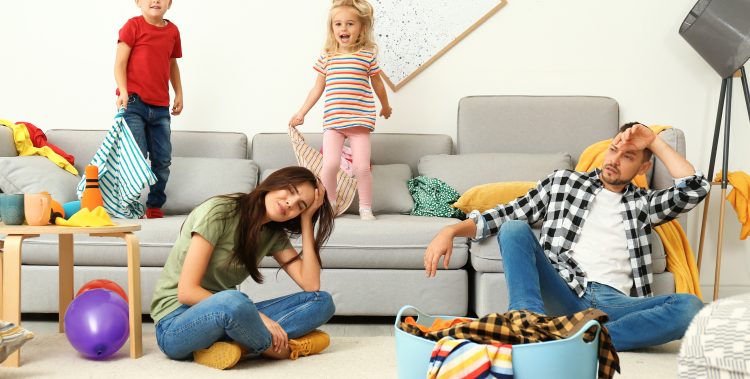 This article is meant to help during those times that you feel like “no,” “don’t” or “stop” are the only words that ever come out of your mouth.

There are certainly times when a firm “No!” is required but to preserve your sanity and stop from feeling like a “mean mom” or “downer dad,” there are a few ways you can reframe the message you are trying to get across that are much more effective than yelling.

It’s the same for your kids. When you find yourself tempted to say “no,” pause for a moment and think about what it is that you want them to do. Try saying that instead.

Instead of “Don’t throw the ball in the house,” try “Can you roll the ball to me?”

“Stop standing on the chair” becomes “Let’s put our bum on the seat.”

If they are asking you to do something and it can’t be done right now, let them know specifically when they can do the activity that they want to. So rather than “No, you can’t have screentime right now,” it becomes “You can play Nintendo for 30 minutes after homework.”

This one piggybacks off of the “flip it” concept but adds an element of play.

When you are tempted to say “no,” ask yourself what you want them to do and find a fun way to make it exciting.

If you want to stop your child from taking more toys out of the box (and maybe even clean some up), turn it into a game. “I bet you can’t put eight toys in the bin before my timer goes off!” or “Let’s stand at the edge of the carpet and see how many toys we can throw in the bin.”

If you want your child to stop running in the house, ask them to show you how their favorite animal would walk to the kitchen (as long as it isn’t a cheetah!)

If your child asks if they can do something that they can’t right now, you can frame your response as “Maybe we won’t ________ right now but what if we (suggest one of their favorite activities)?”

This one is incredibly effective for my five-year-old son. He is very independent and has been described as “strong willed” on more than one occasion. Basically, he resists being told what to do in any capacity.

Rather than telling him he can’t have a treat before dinner, I will tell him he can have grapes or a carrot.

If he refuses to get dressed for school, I let him choose between two outfits that he can wear with his favorite cartoon characters on them.

If he doesn’t want to get in his car seat before we go somewhere, I ask if he wants to buckle his own top belt or harness.

This one comes with a bit of a caveat; you need to make sure that the options you give the child are very specific and never offer a choice on something if you are not happy with the options.

For example, it could be problematic if you say that they can choose their outfit for school without giving them specific options to choose from and they decide they are going to wear their bathing suit.

Set up for success

We all know those situations where you are inevitably saying “no” repeatedly. The treat or toy aisle in your local grocery or department store comes to mind here. Try to avoid putting your child in these situations if possible.

Try to mitigate the siutation to find ways to get things done while setting your child up for success.

If you want to visit your aunt but she has a front room with many breakable items on low tables and couches that no one is allowed to sit on, maybe you and your energetic toddler can meet her at a park or your house instead.

If you must take your child somewhere with many limitations and they do well, make sure to give them plenty of praise and possibly even a reward of some sort for their patience.

Sometimes saying “no” almost seems like a reflex to us parents. We say it without even thinking about it. The next time the word is about to roll off your lips, ask yourself why.

If what the child is doing or wants to do isn’t hurting anyone, why not say “yes?”

That’s when I decided I needed to change the way I was doing things. Now, when/if he says that sentence, I almost always say yes to what he is asking (within reason, of course) and it blows his mind every time. He is usually in a much better mood right after that interaction – and so am I.

Try to reserve “no,” “stop,” and “don’t” for situations that affect your child’s or another person/animal’s safety.

When you do need to pull it out, make it count and be firm.

Crossing the street without looking both ways, running in a parking lot, pulling the dogs tail, these are all instances where you should use one of these words and say it loudly and clearly with a straight face.

After the child stops what they were doing, make sure you follow it up with a hug or touch on the shoulder and a “Thank you for listening.”

The old cliché about catching more bees with honey rings true. Using these tips to frame things in a more positive light and cut down the number of times you need to limit your child really can result in a positive change in their attitude – and yours as well!